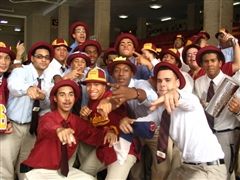 Cardinal Hayes High School also introduced a companion program to the Academy Program entitled the Enrichment Program, which also offers small classes and support services to students who are admitted with the proviso that they participate in the specialized support offered by this program. As a comprehensive high school, these programs enable us the opportunity to serve even a wider range of learners. In addition, during this time, Cardinal Hayes High School introduced the 9th period class which gives students an opportunity to complete homework and study under the supervision of the faculty for one hour each day after school. These programs offer Hayesmen the best opportunity to reach their full academic potential.

Cardinal Hayes High School continues to have an excellent athletic program with outstanding programs in football, soccer, basketball, baseball and track. Our basketball program continues to be one of the top ranked programs in the city providing many of our player Division 1 collegiate scholarships. Several years ago Hayes introduced lacrosse as a varsity sport and the program has grown each year. A large number of students routinely are involved in our extensive athletic program.

“Up Hayes and all Its Loyal Men!”
Back