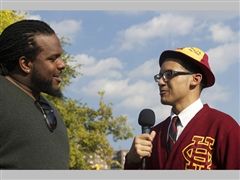 The auditorium is the centerpiece of the main lobby. Also in 2001, work commenced on the renovation of the science labs, a gift from our current chairman of the Board of Trustees, Albert Salvatico, ‘68. The renovations include completely renovated labs for the science classes and additional science lecture classroom renovations.

In 2001, Cardinal Hayes High School realized that there was a pressing need to serve students who had special learning needs and embarked on a bold new course with the introduction of the Cardinal Hayes Academy Program. Realizing that many students with individualized educational plans (lEP's) were being taught in high schools without getting the proper accommodations, the Academy Program provides a vehicle for IEP implementation by setting progressive goals for these students. The program is limited to a class of twenty students and employs a specially trained Director and Faculty. The program has thrived and continues to successfully “mainstream” students over time. Cardinal Hayes has consistently had a waiting list for the twenty seats available under the Academy Program where students are fully integrated in Hayes student life.

In September 2002, Cardinal Hayes embarked on a new leadership model by adopting the President/Principal Administration Model. Father Graham, now Msgr. Graham, became the school’s first President and Brother Christopher Keogan was appointed Principal. Msgr. Graham embraced the challenge of increasing the Endowment Fund in order to implement a number of projects to modernize the learning environment at Cardinal Hayes High School. The plans were launched for a bold new program to raise $10.0 million to address the need to renovate the core infrastructure of 650 Grand Concourse including replacing the roof, all the windows and upgrading major components of the physical plant. The plan also called for $6.0 million dollars to be raised to grow the endowment in order to provide a steady source of income to assure affordable tuition, continued staff development, merit based and income based student financial aid and an emergency fund. The Campaign began in April 2005 and ran until 2007.

However, in June, 2004, Cardinal Egan appointed Msgr Graham Pastor of Saint Raymond’s Parish in the East Bronx and assigned Father Joseph Tierney as the new President of Cardinal Hayes High School. Father Tierney immediately assumed the leadership of the “Our Future — Your Hands Campaign” to begin the task of generating the needed funds. The Campaign kickoff took place in October 2005 hosted by Regis Philbin. By April 2006, it had generated $6.0 million in donation and pledges.
Recognizing the need for additional space for the Guidance Department, a plan was begun in 2005 to relocate the Guidance Department to the recently renovated Xavieran Brothers residence on the Mezzanine. The complex included individual counseling offices, a group counseling suite, a college admission work area, a large guidance lounge, a service center and other office spaces. This area was completed with a computer lab which is almost constantly in use by student as they prepare for the college application process.
By the end of 2005, the student population hovered around 1,020 students and for the first time it was becoming evident that the historic stable pool of student candidates for admission was shrinking due to demographic changes in our local communities. In 2006, work was begun on the new Msgr. Graham Fine Arts Wing which would be the home to the band, the Art Studios and Choral Group. The Fine Arts Wing was dedicated to Monsignor John Graham in the fall of 2006 and is a rich and vibrant part of our school. Also in 2007, an astro turf practice field was made possible by a generous donation from Mr. John Duffy. The Duffy Family Athletic Field (fondly called the “Duff” by Hayesman) is a multiple use facility providing a number of athletic teams the opportunity to practice on a safe, well-maintained facility.

In 2007, the Library was named for Monsignor Victor Pavis, former teacher and Principal of Hayes, largely due to the generosity of Mr. Michael Johnston, ’65. During that time, our Media Center was enhanced with the creation of the Martin Scorsese, ‘60 Media Center. This state-of-the-art facility enables generations of Hayesmen who like its namesake — demonstrate an interest in film and television. The Media Center enables students to produce, edit and sound design all their videos and other media production projects. The center is staffed by an experience Media Director who teaches innovative courses such as “Lights, Camera, Action” and the “Story of Movies. In 2009, the Chemistry Lab, which was part of the renovation project of 2001, was named for Manny Villafana, ’58 as part of the fiftieth anniversary of his Hayes graduation. Mr. Villafana has been a strong and generous supporter of Hayes since his graduation, and he has been quite successful in the field of medicine and surgery initiatives. Mr. Manny Villafana would also later be among the first to contribute to the acquisition and deployment of PolyVision and Smart Boards throughout our classrooms.

In addition to the financial challenges, the school also needed to the challenges of providing a quality New York State education to many under prepared students. Many entering Hayesman require additional assistance in both reading and math. The socio-economic status of certain students mandated that Cardinal Hayes have additional Pupil Personal Services available including counselors, drug prevention counselors, social workers and school psychologists. Cardinal Hayes not only meets the NYS mandated service requirements of its neediest students, but heavily leverages its long-standing culture of compassion, respect for the individual and Catholic faith to address learning challenges.
Back