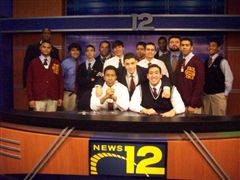 The fund coupled with the Annual Giving Fund fueled the growth of Cardinal Hayes in the 1990’s. Remarkable growth in technology also was a hallmark of the 1990’s. Computer labs were opened through the generosity of William Reilly in 1998, and soon thereafter our technology network had spread to every classroom with the advent of the Internet. Today, Hayes proudly boasts of two fully equipped computer labs, an additional lab in the Guidance Complex and a computer bank in the Library. The school continued its tradition of updating equipment as technology changed.
The Fine Arts program grew in the 1990’s by the addition of the Cardinal Singers - a choral group, and the Jazz Rock Ensemble. The band program, featuring a Concert Band and a Marching Band continues to provide an opportunity for young men to study music and participate in the life of the school as a member of the band. The Fine Arts program also provided the usual high quality yearly theatrical presentation. Athletics thrived, and our program in track and soccer experienced significant growth. Academically, Cardinal Hayes High school continued to deliver a quality education following the dictates of the New York State curriculum. The Cardinal Hayes Chapter of the National Honor Society was re-established in the 1990’s, as was the National Honor Society Induction Ceremony.
The Religion and Community Services programs at Hayes received special attention from Father Graham who made it the centerpiece of all things at Cardinal Hayes. Hayesmen participated in retreats, mission collections, community projects, penance services, school wide liturgy and daily prayer which were hallmarks of his era as they were an integral part of the life of a student at Cardinal Hayes.

Father Graham introduced the Sacramental Preparation Program and also reorganized the Exceptional Children’s’ Program, a Hayes program which employs student volunteers to work with developmentally challenged adults within the local community. Cardinal Hayes High School maintained its strong record of excellence in graduation rate and college placement throughout the 1990’s. During this time, student enrollment hovered at about 1050 students, and Cardinal Hayes continued to expand resources to available students to assure academic excellence.

In 1997, the McQuillan Fitness Center was dedicated in the gymnasium introducing a wide variety of exercise and fitness equipment to our athletes and the student body. The McQuillan Fitness Center’s availability helped introduce a Fitness elective to the curriculum. To close out the 1990’s, the library was automated using the “Athena” System and refurbished with a new shelving configuration and furnishings. Six desktop computers were introduced in the Library for the first time to help with student research.
Back