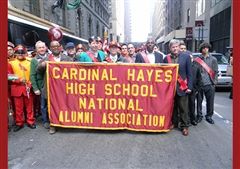 The motto of the school takes on personal meaning with remembrances of these men- "FOR GOD AND COUNTRY". May their souls rest in eternal peace.

Hayesmen can be found in all walks of life from one end of the globe to the other, as they "march on, loyal sons and true.” Vocations to the priesthood and religious life have been a trademark of Hayes over the years. Over 200 priests of the Archdiocese proudly claim Hayes as alma mater including Auxiliary Bishop Emerson J. Moore. Over 120 other Hayes graduates have entered religious orders for priests including the recently appointed President of Providence College, Father Quigley O.P. Vocations to the various communities of brothers number near 300. Every possible profession or occupation will find a Hayesman in its midst.

Countless graduates serve the people of New York as policemen and firemen. Hayes can be proud of our generals in the Military. Every other area of public service from Politician to Pediatrician is represented by a Hayesman. Like gold, Hayes is precious in the sight of so many; like gold, Hayes has kept its values; like gold, Hayes is still sought after by young men who want a fine Catholic education. For 50 years Hayes has created a spirit and great memories - the boat rides, the Cardinal's Calendar, Manny's, the Serata ltaliana, the Challenger, the Soiree Musicale, Randall's Island, Senior hats, the Hayes ring, "Beat the Mount", the Senior Prom, gym classes, the mashed potatoes and gravy, Exceptional Children's Program, bus and train passes, the locker sections, the raffle, the parades, the SC's, Jug, the dances and the Cathedral graduation. Hayes is proud of its history and confident of its future. Hayes is proud of you, our loyal sons and true. Remember Hayes in your prayers, remember your fellow classmates and your teachers, priests, brothers, laymen and women -for Hayes is more than a school. Hayes is a way of life!

UP HAYES AND ALL ITS LOYAL MEN!
Back