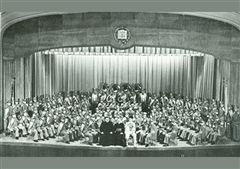 We have played for Popes (Paul VI in 1965 and John Paul II in 1980) and Cardinal Spellman, Cooke and O'Connor. We have played at City Hall and in the Cathedral of St. Patrick as well as in Central Park and at Yankee Stadium.

Our usual program still includes our famous half-time shows, our Fifth Avenue Parades and our annual Spring Soiree Musicale. Under the direction of Father Thomas Dunn, the Cardinal Hayes Drama Society - the Patricians - was from the beginning of one of the most successful and popular societies of the school. That popularity may be a result of our inviting several of our "sister" schools to be a part of this Hayes dimension! The Drama Department has contributed significantly and consistently to the prestige and capabilities of the school.

The first production was Captain Applejack in 1942 and the Patricians followed with performances of Richard the III, The Poor Nut, and Brother Orchid. The production for the 25th anniversary of the school was Harvey in 1966 directed by Father John Spillane and assisted by Father Tiffany and Father Walsh. During the 1970's the Drama Department became known as the Cardinal Hayes Players and under the demanding and challenging direction of Father Jeremiah Monahan, the productions included the best musicals of the day: Damn Yankees, The Music Man, Oliver, and Guys and Dolls. Members of the Cardinal Players were directed in these plays by Mrs. Lorraine Nanko and Mrs. Dolly O’Neil-Mejia who are still a part of the Hayes family. Brother Chris Burns, CFC, took over the director's chair during the 80's and produced such memorable shows as Godspell, Pippin, Man of La Mancha and Joseph and the Amazing Technicolor Dreamcoat.

The latest productions under the direction of Mr. Thomas Kenney have proved that Hayes still can pack the house with Grease in 1989 and West Side Story in 1990. Hayes Drama has always been more than a high school play; it has been a touch of class and is another memorable dimension of this great school.
Back