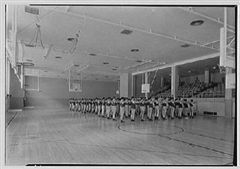 We look with pride to the long line of athletes who have donned the uniforms of Cardinal and Gold to represent us on the playing arenas. We remember our first City Championship team, the Basketball team of 1944, led by Artie Guy, Dermie O'Connell and the Barreras brothers.

Our memories ponder other great sports moments - the 1945, 1946 and 1951 baseball teams who won the Catholic School Championship and names like Bill Stetter, Tom Murrin, Matt Thompson and Pat O'Leary come to mind; the undefeated 1951 football team, led by Jack Stephans and Gerry Bochicchio; the 1951 track team who were champs at the Hayes Games and runners-up in the Catholic Schools Championships with Wilfred Storz leading the way; the 1955 City Championship handball team coached by Father Leo Halpin; the undefeated 1959 swimming team; the 1968 and 1970 football teams that won the CHSFL crowns with stars like Bob Spillane and Steve Moor; the 1973 hockey team that captured their first of many league championships led by Bill Condon and Bill Beggi and moderated by Father John Lennon.

In more recent days, we can recall the 1975 and 1980 basketball teams that were runners-up in the City Championships with players like Vernon Giscombe, Alvin Lott and Jamal Walker. Hayes was City Champs once again in 1990 when we defeated St. Nicholas of Tolentine and then All Hallows at Fordham University in a victory that was one of our sweetest! Superstar Jamal Mashburn led the Hayes team to its second City championship. In 1985 the baseball team was the Catholic School Champ, and we beat Mount at Yankee Stadium and we went to Shea Stadium that year for the playoff game. And who will forget the Mount games; Triborough Stadium, Randall's Island, Baker Field, McGovern Field, the crowds, the band, the half-time shows - and no matter what the season records were, the excitement of being with Hayes was honor enough. The chant "BEAT THE MOUNT" can still be heard in the Hayes corridors for days before the big Turkey Bowl on Thanksgiving. The series record shows the competitive spirit of both great schools - HAYES has won 17, lost 23 and 5 have ended in ties. No matter, let us gather to "BEAT THE MOUNT" once again this year and every year.

Among others who proudly wore the Hayes uniform were in baseball, Frank Lyons, "Peppy" Lamonica, Bill Froats, John Davolio, Bill Ott, Steve Dillon and Ray Tully; in basketball, Father Lou Gigante, Kevin Loughery, Tim Shea, Gerry Ward, Myles Dorsch and Jimmy Black; in football, the Moran Brothers, John Dwyer, Fred Rossetti, Mal Stafford, Gerry Hastings, Genaro Novelli, Tony Alquero, Ray Duffy, Joe Foy and the Gilmore Brothers. So many of these players and others were coached by a Hayes gentleman and legend, Mr. Joseph Walling who died in February 1988. May he rest in peace after his nearly 40 years of service to the Catholic school system.
Back