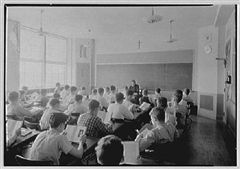 Almost all Hayesmen have gone onto colleges from coast to coast and whether it is an "ivy league" institution or a military academy of the United States, Hayes will be represented on the front lines.

The tradition of discipline has been another trademark of Hayes and its students. Visitors are often impressed at finding such a high standard of order maintained in a school with such a large number of young men - the halls are quiet so that learning can take place, the dress code is jacket and tie so that school is taken seriously and penalties are swiftly dealt out with a daily gathering in Jug in Room 117 (now 139).

Members of the alumni often return to their alma mater to express their belated appreciation for the Hayes culture of personal discipline. They remark that a code of conduct and courtesy provides an atmosphere of order so that the learning experience may take place. The tradition of discipline was established in no small way by the Dean of Discipline, and there were many famous "mean deans" - Monsignor Stan Jablonski (known by all but never openly addressed as "JABBO"), Bishop Mahoney, Father Ansaldi, Father Jeremiah Monahan, Father McCormack, Brother O'Connor, Father White, and Mr. Patrick Racioppo for example.

With the ever-increasing cost of education and a smaller student body, Hayes has had to turn to fund-raising and with unprecedented success the alumni of Hayes have shown that they are truly "loyal sons". In 1981, a program - "A Plan for the Eighties” - was inaugurated by the Alumni Association under the direction of the Alumni Moderator, Father John Mulligan ('50) and over the next five years the plan raised over $1 million for the school. These funds were used for tuition assistance and for major renovation of the Hayes building - new auditorium seats, computer equipment, chapel renovations, gym equipment and two school vans. The response from the Alumni has been so positive and so generous that Hayes created an Office for Development, has a yearly Phonathon, inducts alumni who make substantial donations into the Founder's Club and invites Alumni to become members of the Principal's Golden Circle.
Back