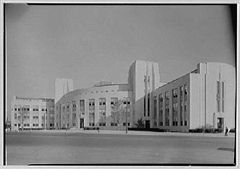 Cardinal Spellman had a dream and a vision - a dream that a fine, well-equipped, religiously sound school could be built in a brief time to educate the young men of the Bronx and Manhattan and other nearby areas - that dream came true in less than two years. Cardinal Spellman also had a vision - a vision that this school would provide a Catholic foundation and an academic standard unmatched by any other school in the Archdiocese.

The dream and the vision of Cardinal Spellman, our founder, took form early in 1940. War clouds were on the horizon and some people questioned the building of a high school in such times. With optimism based on faith and with confidence in the generosity of the people of New York, Spellman gave the word to build! Before the building operations started, the site was occupied on the Grand Concourse front by a filling station and along the lower rear by a row of squatters' cabins. It is a local tradition that the site of Hayes was used as a convenient disposal area for the earth removed in the building of the East Side subway system. That theory is substantiated by the difficulties encountered in establishing the foundations of the school by the builders. The first principal - Bishop Philip Furlong - was sent by Cardinal Spellman to survey the newly purchased property and the Bishop shook his head wondering how anything of worth and substance could be built on such an oddly-sized piece of property - one that curved off the Grand Concourse and then dropped 5 stories to the railroad yards below. But the order had been given to build! Everything went according to schedule. The cornerstone was laid on November 20, 1940, the birthday of Cardinal Hayes.

Almost magically, all the materials were assembled and even half the cost of the school ($3 million) was subscribed before a stone was placed. Finally, the day of dedication arrived - Monday, September 8, 1941, the 49th anniversary of Cardinal Hayes' ordination and interestingly enough the 9th anniversary of Cardinal Spellman's consecration as bishop! In the presence of four bishops, countless monsignori and priests, the civic community led by Mayor Fiorello La Guardia and Knights of Columbus, Cardinal Spellman first blessed the Chapel of Cardinal Hayes High School and then hung the ivory crucifix over the entrance to the auditorium. The ceremonies were then followed by SCHOLA BREVIS for the several hundred original students of Cardinal Hayes High School. 650 Grand Concourse soon became a landmark. It had no campus or athletic field, but the #1 bus stopped at its front door and only two blocks away you could catch the #2, #4 or #5 subways. Yankee Stadium and the D train were just across Frank Siegel Park and it was a short bus ride to Randall's Island and its practice fields and huge stadium.

Hayes quickly acquired a fine public image. People admired its marching band, its well-dressed students, its renowned faculty and its unique spirit. The Cardinal and Gold were welcome colors throughout the City of New York for all kinds of occasions. The history of this institution is a proud one. Hayes was established to provide that dream and vision of Cardinal Spellman: a quality education in academic and Catholic values to young men of middle class families who could not afford the then existing private schools. Hayes began with tuition of $5 per month per student! At the height of its enrollment, Hayes had a student body of 3,400 students. The main building was populated by the sophomores, juniors and seniors. The only freshmen at 650 Grand Concourse were the honor students and specially selected members of the Band. All other freshmen attended one of the 3 annexes - St. Bernard's on West 14th Street under the direction of the Christian De La Salle Brothers, Good Counsel Annex on E. 91st Street staffed by the Marist Brothers or the Holy Family/St. Helena's branch under the guidance of the Irish Christian Brothers.

The original faculty of Cardinal Hayes High School consisted of 42 priests, 47 brothers from 4 religious orders (Marist, Xaverian, De La Salle and Irish Christian Brothers), and 4 lay teachers in the Physical Education Department. Over the years the annexes closed and with the close of St. Bernard's in 1970, all students were in the main building for their four years of Hayes education. The present student body numbers nearly 1,000 students.
Back